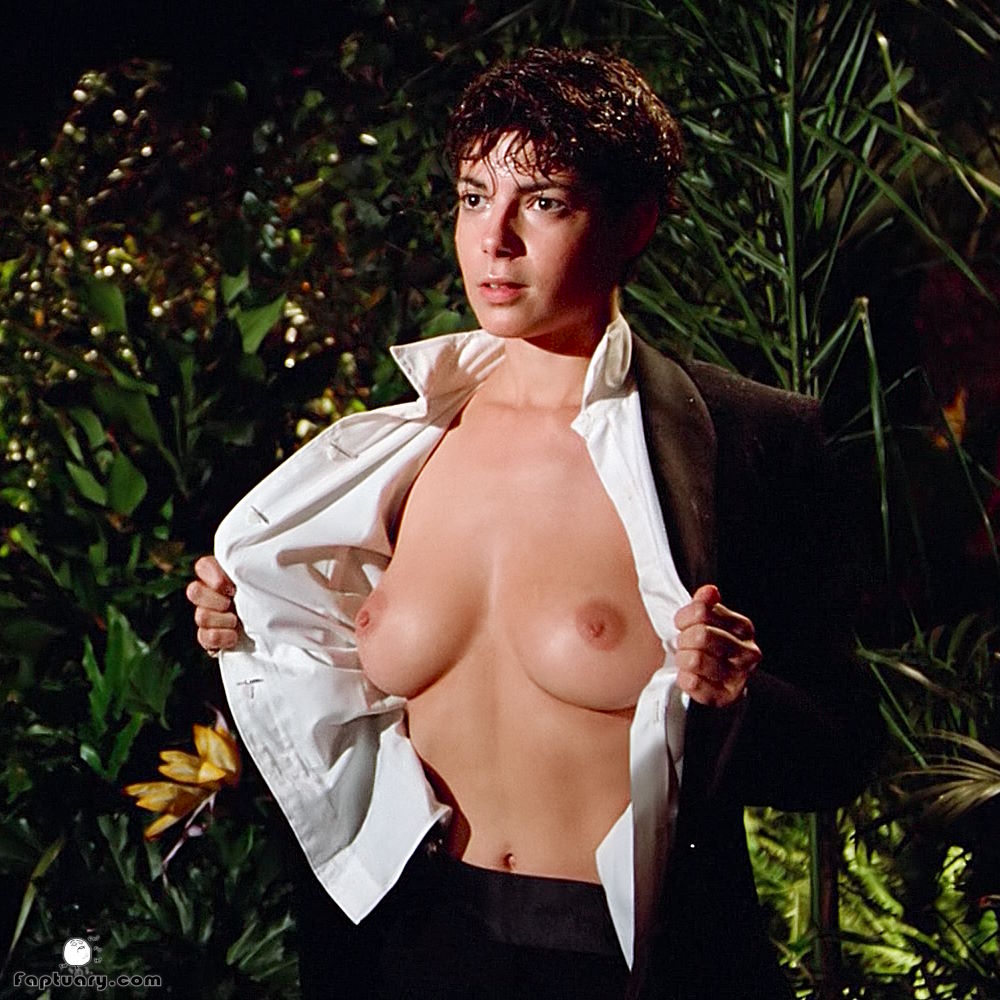 Joyce Hyser naked in the magical boob reveal scene from Just One of the Guys has got to be one of the defining moments of the 80s. Or maybe I’m thinking of it backward, and the 1980s just produced content like that because it was emblematic of the era. Off the top of my head, I’m reminded of Betsy Russell pulling her top off to flash her tits in Tomboy, which incidentally came out the exact same year as this film did – 1985. Same energy and same fap potential. What I would give to live eternally in the 80s.

The funny thing about the Just One of the Guys nude scene is that even though it has achieved iconic status, it’s not exactly long. I’m not even sure that it covers a full two seconds, but I do know that the short time it covers has made many a teenage boy’s viewing experience since the film came out. In fact, the nude shot was extremely short by design. In the commentary track for the movie, Joyce Hyser did say that when the movie was being filmed, freezeframe wasn’t a thing that people had access to, and knowing that it would become available would have, to quote her verbatim, “definitely made a big difference in my decision about whether to do this or not.” Lucky us, sitting here in this blessed future. 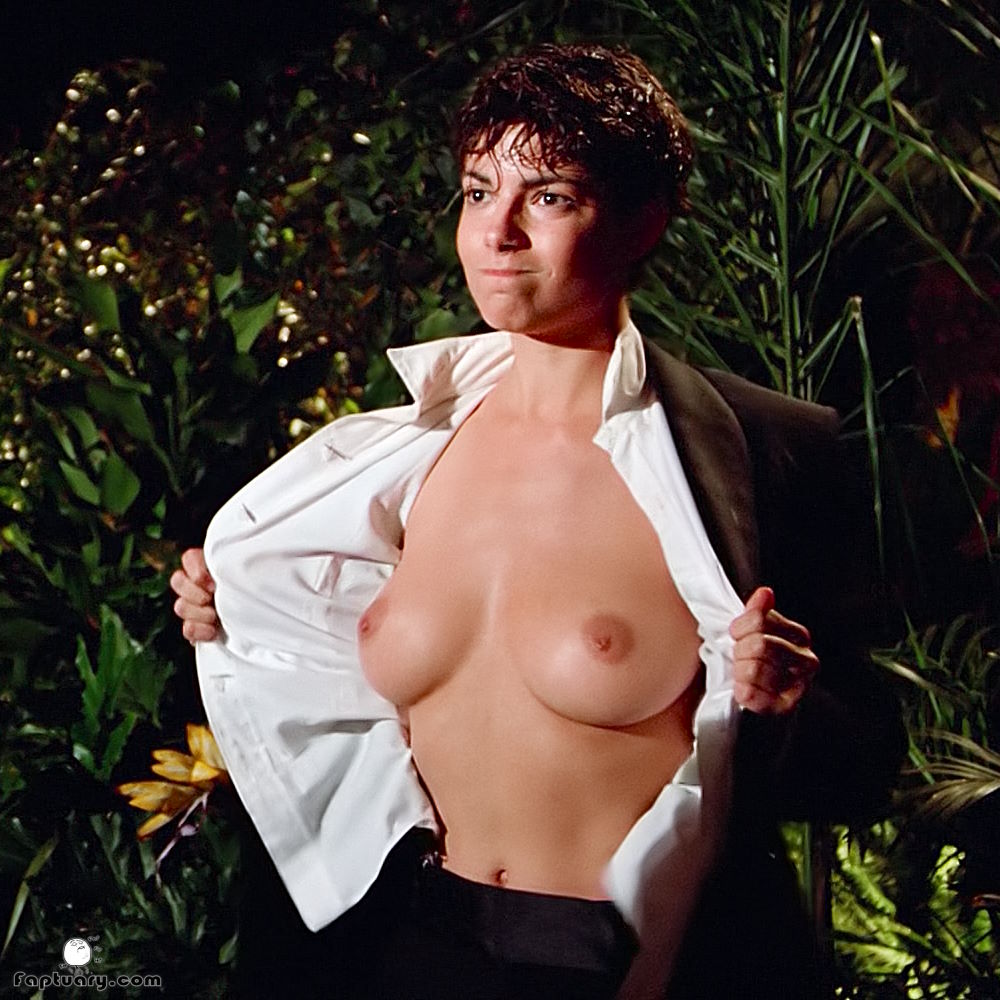 For those who don’t know what this Joyce Hyser nude scene is all about, we need to take a step back and describe what the movie is about. Joyce plays Terri/Terry Griffith, a high school girl out of Phoenix-or-Glendale, Arizona who transfers to another school in order to pretend to be a guy. As so often happens in 80s movieland, whimsical hilarity ensues. Part of this whimsical hilarity is Terri getting a best friend whom she has a sort of crush on, but he thinks she’s a guy. In a frustrated effort to prove to him that she’s definitely not rocking a penis down below, she rips her shirt open to reveal her majestic tits. And how lucky we are, since the actress revealed (pun intended) in the commentary track that she originally wasn’t going to do an actual nude flash, having prepared a bodysuit. This moment being immortalized on video is super important because this did end up being Joyce Hyser’s only nude scene.

And like with so many of the best nude scenes in cinematic history, the Just One of the Guys boob reveal scene gets both of the F-rated tags. Lisa Gottlieb is credited as the director, but she has revealed on multiple occasions that she was also a writer on the film, even though the studio cheated her out of the credit. The joke’s on them, because even though Lisa didn’t get all of the fame and money from an official writer’s credit, she got honored as such on the Faptuary, which at least two or three people might say is even better. 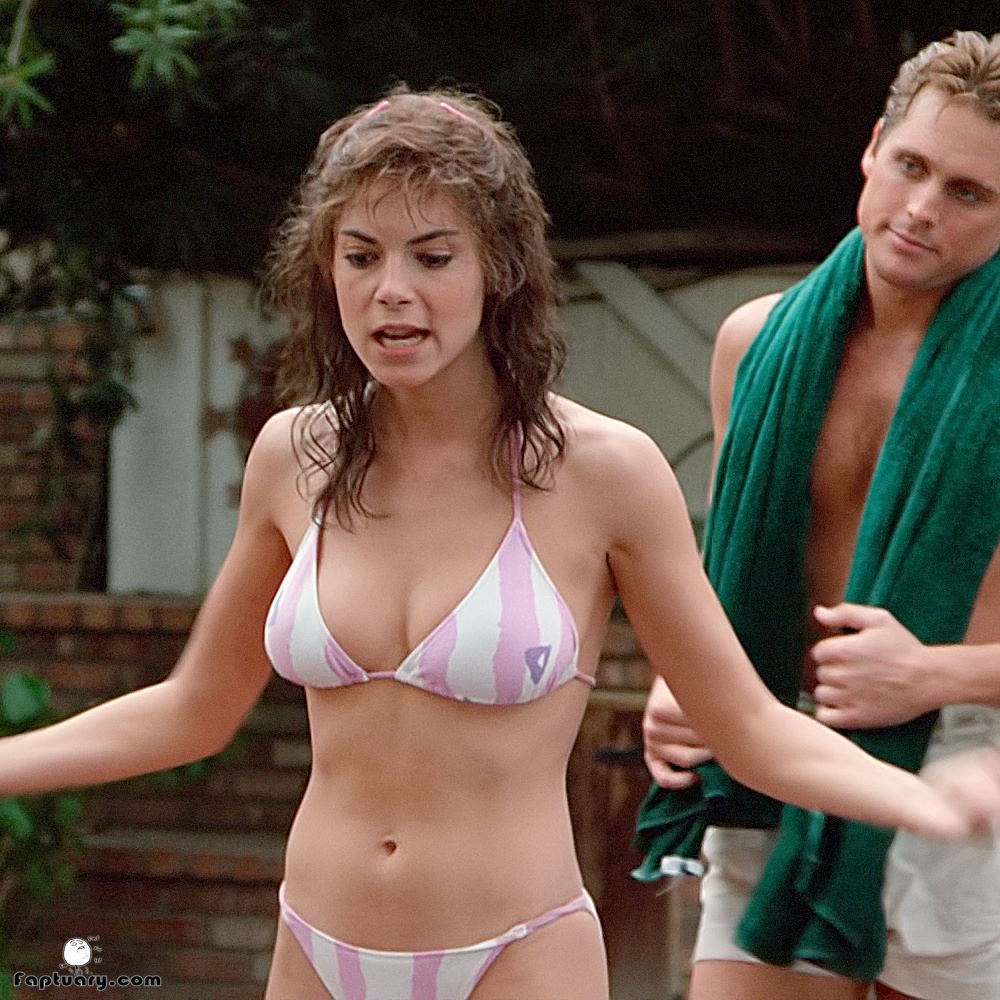 I’d be remiss not to mention the Joyce Hyser bikini scene at the pool near the beginning of the film. Although there’s no nudity in it, it acts as a sort of foil to the nude scene, showing a much more feminine side of the Terri. Also, that body is amazing, even though the actress said that she wasn’t feeling great that day, commenting that she felt that her “belly’s a little poofy.” Personally, I have no complaints in the fappability department. Unfortunately, this is the only time and place we’ll ever likely see Joyce Hyser naked. I think a whole lot of people were expecting to see both Joyce and Nichole Hiltz nude in 2003’s Act of Revenge, but alas, that did not materialize, and even that was two full decades ago. But let’s not dwell on what was not and instead enjoy what was, and that is the incredible Joyce Hyser nude scene from Just One of the Guys. 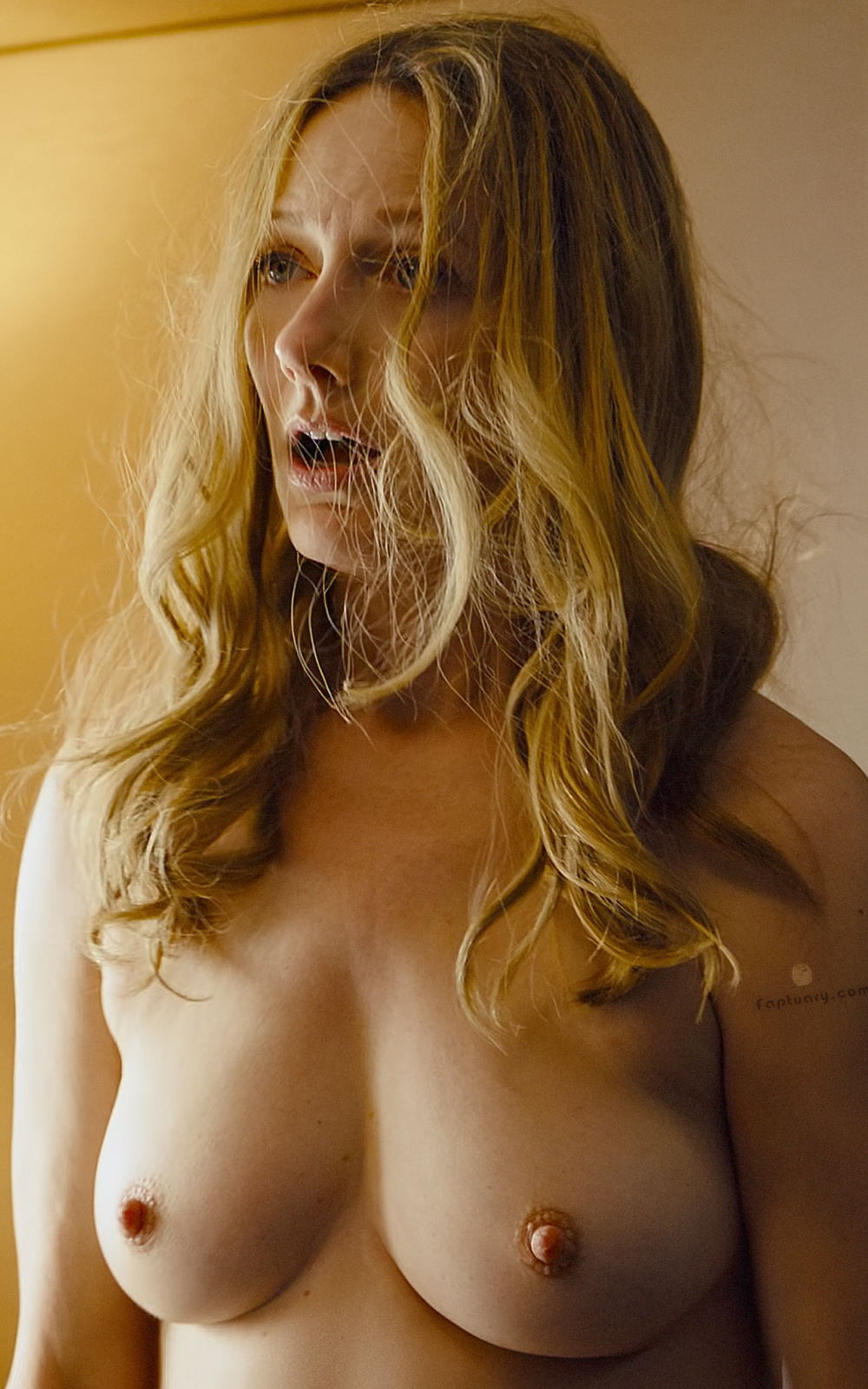 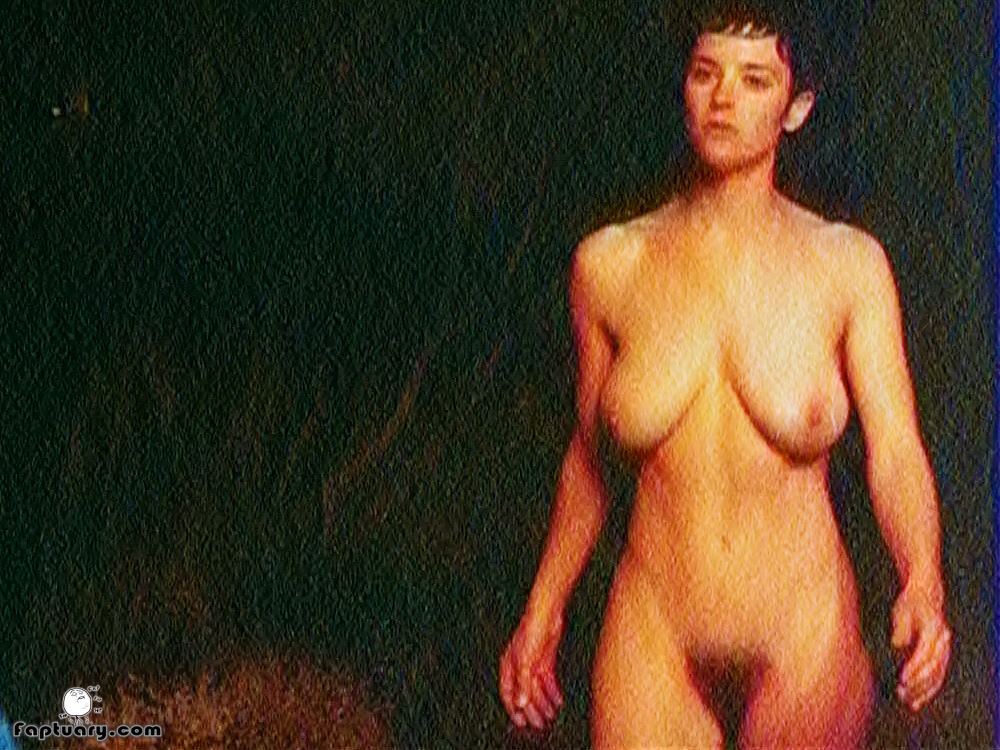 Is it weird that the only place where you can see Ullie Birve naked is in a PG-13 film? Is it even weirder that she has not one, not two, but a whole three full frontal nude scenes in said PG-13 film? Yes, it absolutely is, and I love it. PG-13 nudity is the best thing ever because it’s so natural, so seamless. These are the kinds of nude scenes that separate titty films from porn in the strongest way possible, and when the nude scenes in them are full frontal, all that much better. I’m talking about the film that was originally released in Australia in 1997 as Epsilon and worldwide as Alien Visitor.

So under what circumstances do we get graced with an Ullie Birve nude scene in this film? Well, the answer, naturally, is that she is an alien. That’s not an immigration comment; she is literally a literal alien from outer space. The fact that she looks exactly like a human woman is quite fortuitous for us when combined with that she doesn’t understand the point of wearing clothes. Until the other main character forces her to get dressed, she sort of just walks around naked everywhere. It’s funny because this reminded me of one of my favorite (for obvious reasons) tropes, so I decided to look up the Innocent Fanservice Girl trope on TV Tropes, and indeed, this very film is mentioned right in there as an example of it. 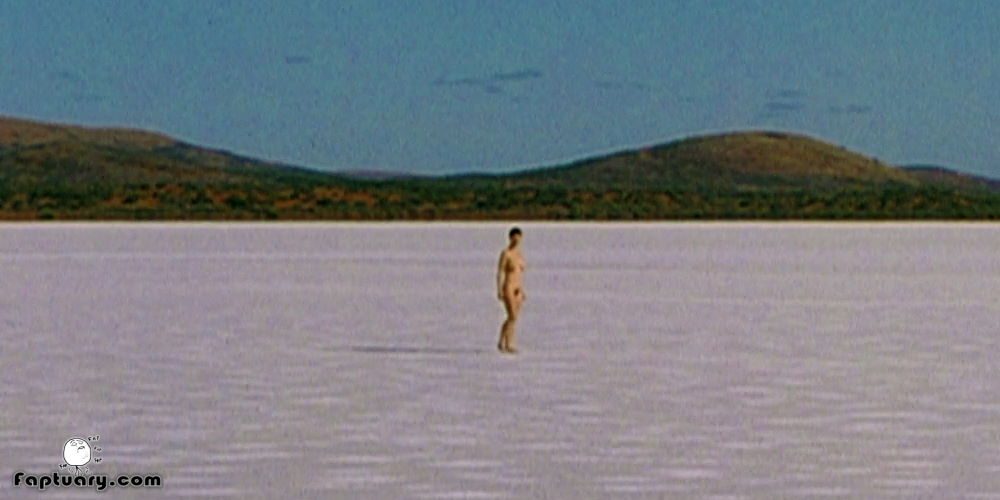 The somewhat bad news is that this nudity is “tastefully done”, so all in all, we get less than a minute of Ullie Birve nude in the truest, most visible sense on screen. I’m not complaining, of course, and the implied nudity lasts closer to 5 minutes, so if you can get your rocks off to that, then enjoy. The first proper nude scene is a bit of a taster. We see the Australian actress naked head to toe while standing in the middle of a desert. Unfortunately, this shot is from a fair distance, so details aren’t as great as can be. The positive here is that it is very well lit, which cannot be said for the rest of her nude scenes in the sci-fi film. 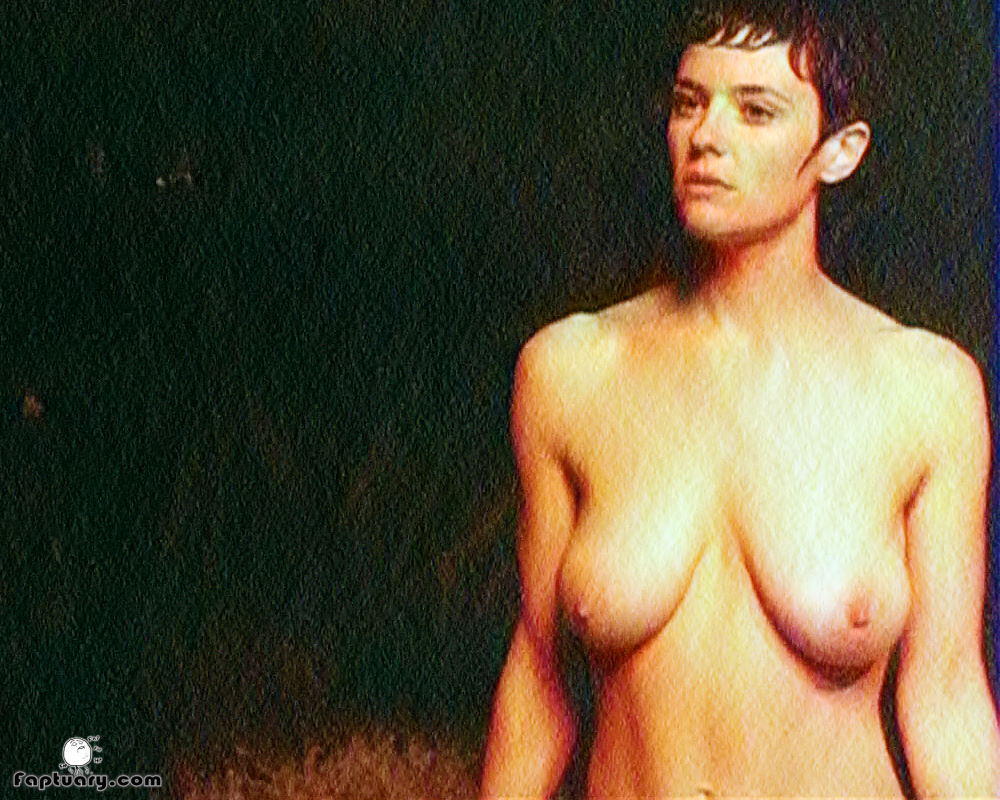 We’re then teased with many opportunities to see Ullie Birve topless at least, but alas, the camera cuts to above her nipples every time. At this stage, you would certainly be forgiven for thinking that the distant full frontal is the best you’re going to get, which makes what happens next that much more satisfying. In spite of being, once again, a PG-13 film, we get a shot of our alien visitor walking walking toward the camera completely naked and with everything on show. Allow me to qualify that. Not only do we get full bush. Yes, full hairy beaver. But we also get to marvel at her big tits as they bounce and sway to her walk. 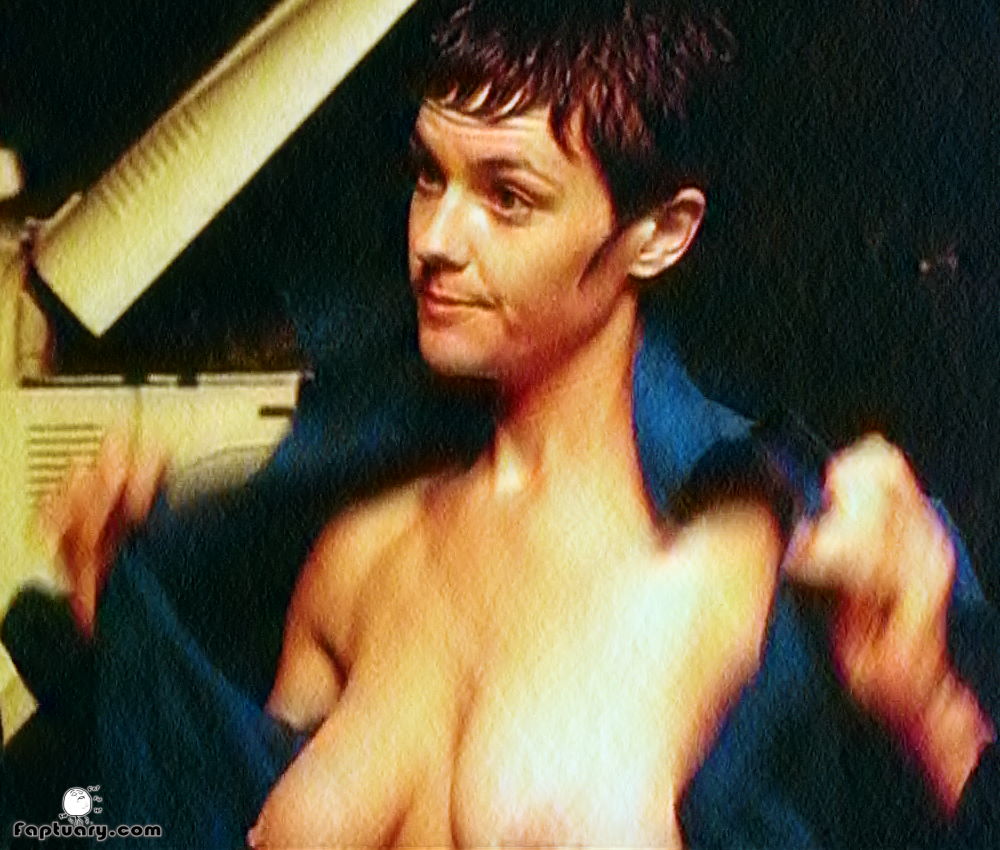 Our naked alien visitor then gets forcibly dressed by Captain Cockblock, but don’t worry, this isn’t the end of it. She gets pissed off once she finds out that she is on Earth (understandable; I get angry every morning I wake up on this cursed planet), and begins destroying his camp. She’s only wearing a man’s shirt at this stage, so suffice it to say, her hairy pussy and ass make many an appearance as she thrashes about for half a minute. I know there are guys out there that love to see Australian celebs nude, so hopefully this obscure little piece of Outback cinema gives you that fix. Below are all the screencaps of Ullie Birve naked.